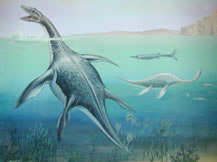 Across the world precious opal occurs in very few locations because it required a very special series of geological, climate and possibly biological phenomena to coincide for opal to form. These special criteria occurred in what is now the great desert regions of central Australia.
During the Cretaceous period (65-140 million years ago) this area was an Inland Sea. Fine marine sands rich in silica were deposited around the shoreline. The Great Artesian Basin formed when the sea receded. During the mid-Tertiary period around 30 million years ago, deep weathering caused changes to the sediments releasing large quantities of soluble silica. This solution travelled along faults and joints in the ground, infilling cracks and voids. The gel eventually hardened to form common opal, and in rare circumstances it formed precious opal. It was estimated that it takes 5 million years for an opal to form one centimetre thick!

Occasionally, Fossil bones and shells from the early Cretaceous period (120 million years) have been opalized and in rare circumstances, with quite brilliant colors. These make magnificent show-pieces and are sought after by collectors and museums.

The major commercial outcrops in Australia are Lightning Ridge, Coober Pedy, Mintabie and the Queensland Boulder Opal fields.
Opal also occurs in other parts of the world such as Africa, Brazil, Ethiopia, Honduras, Indonesia, Mexico, western United States of America and some European countries.  Each area produces opal with specific characteristics to it's location.